A Day in a Village

Sometimes our days of missionary life lead us into unexpected places.

Sometimes our days lead us on a very special visit to a small village.

When we leave our gate in the morning, there is always a feeling of apprehension or hesitation because we just don’t know what is coming up around the bend of the day.

One day last week, we had gotten a text from our metal guy that his wife had given birth to their first baby and the baby was sick.

Our metal guy is a regular around our house. He takes care of all the metal work… our security doors, windows and even the mosquito screens are made and repaired by him. He was just at our house to replace all the screens because #alexanderrush ran his nails repeatedly through them in an attempt to gain entrance into the house. #puppyproblems

When we got our metal guy’s text about the baby, Jeremy asked if we could pray for the baby and the metal guy texted back yes. He also asked if we would go see the baby. Jeremy sent him a text that said, “Yes, does Friday work for you?”

In the end, we were going to go, pick up our metal guy and he would take us to the house where his wife and baby were staying.

Friday arrived and we packed our family into the truck to go pray for a newborn baby.

When the metal guy got in the truck with us, we realized he didn’t speak French really well. He knew French enough to communicate his trade of metal work but not much beyond that. He was supposed to be leading us to where his wife was but he seemed to be directing us out of our town and down the road that takes us south along the coast.

To which Jeremy, as we bumped along through huge puddles, around large pot holes and past the wares being sold in the market, said, “Jen, be prepared… I don’t really know what today is going to be like. I have a feeling we are heading out into a village. He is taking us south.”

Now, if I’d known we were spending the day in a village, I would have been a little more prepared but for the most part we had what we needed in the truck for a village expedition. Lots of water, toilet paper, a wrap for a makeshift bathroom, plenty of hand sanitizer, our own lunch spoons and even a small plastic mat to sit on.

Truly, all of those things could be needed.

We continued down the road, preparing the girls for a long, hot day. We didn’t know where we were going, how long we’d be traveling or when we’d be back home. This was our first experience to venture out into an unknown village where we didn’t have a connection with a pastor or a church-related reason for going.

It was also close to lunch time but we knew we didn’t have time to stop and get our own lunch somewhere nor did I have anything for the girls to snack on.

Along side the road, a few monkeys played in the trees. 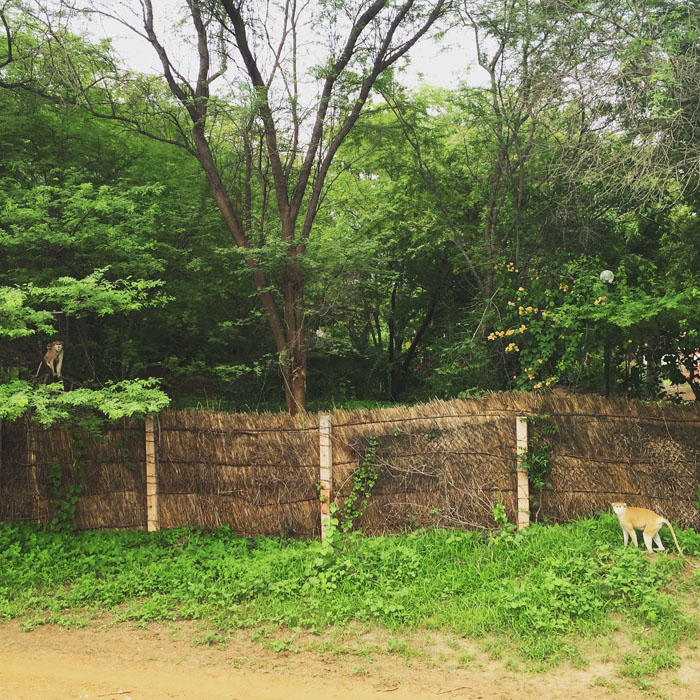 Our metal guy made a phone call in Wolof, tried to direct us in French and seemed anxious to get there.

Slowly, we realized that he hadn’t seen the baby yet. We were his ride to see his new little family.

We drove farther south than we’d ever been before and then made a left turn heading into the desert. Random palm trees, small farm plots, a few goats and a herd of zebu dotted the sand as we drove through.

Then, he told Jeremy to turn right onto a road that went through a field of peanut plants. Senegal grows a lot of peanuts.

He told us to go left… then, he realized it wasn’t left but the path to the right that we needed which told us he wasn’t exactly sure where he was going either. Jeremy made a tight turn back and got us on the correct path. A path that led us right into a small group of huts that turned out to be his wife’s family’s village.

We pulled the truck through the entrance of their fence and up under 2 trees. The kids gathered around our truck, pointing and laughing in a way that told us this was a rare, if ever, occurrence during their lifetime.

A toubab was pulling a gigantic truck right up into their front yard.

A yard surrounded by about 15 or so huts… some made with mud/grass and some made with cement with thatch roofs. There were mats lying around where women sat preparing food and a group of kids sat pulling bissap leaves off large branches. One hut was a designated kitchen area for the entire village and it sat back behind the others.

Chickens ran all around… chickens of all sizes.

We got out of the truck and followed our metal guy into a small, one room cement structure. He introduced us to his wife and his mother-in-law. They asked us girls to sit on the bed and pulled up a chair for Jeremy.

I glanced behind me on the bed, and there was a tiny newborn boy sleeping under a sheer piece of fabric to protect him from mosquitoes and flies.

He was adorable. And I quickly had him in my arms. 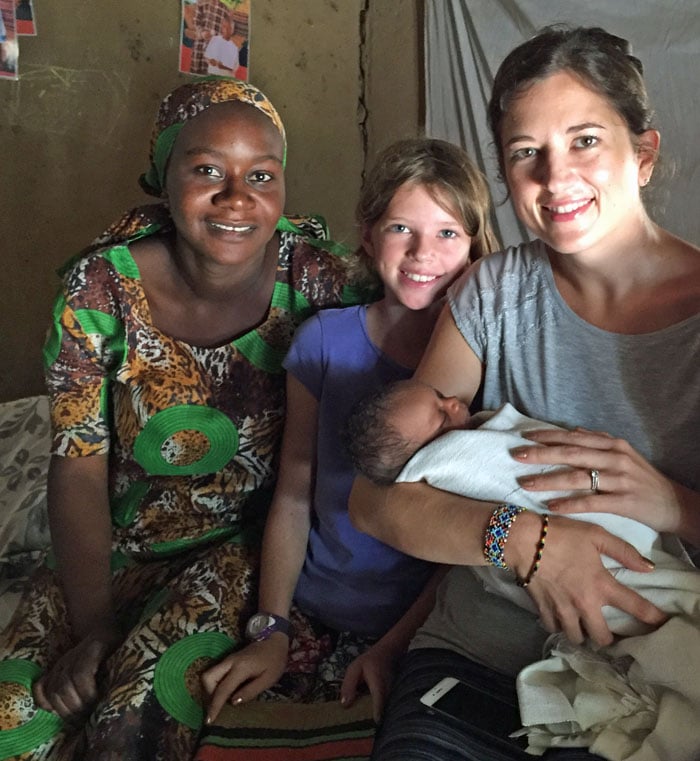 He was only 5 days old and didn’t have his name yet. His name will come just a few days later at his naming ceremony.

We chatted for a few minutes… thankfully, his wife spoke French a little better than our metal guy did so it was easier to communicate with her. The village was Sereer, a people group in Senegal, so that was mostly the language being spoken around us.

It was hot… around 90 degrees and 85% humidity… the family gave us fans to use while we visited.

You can see by our shiny faces that we were all piles of sweat and stickiness. 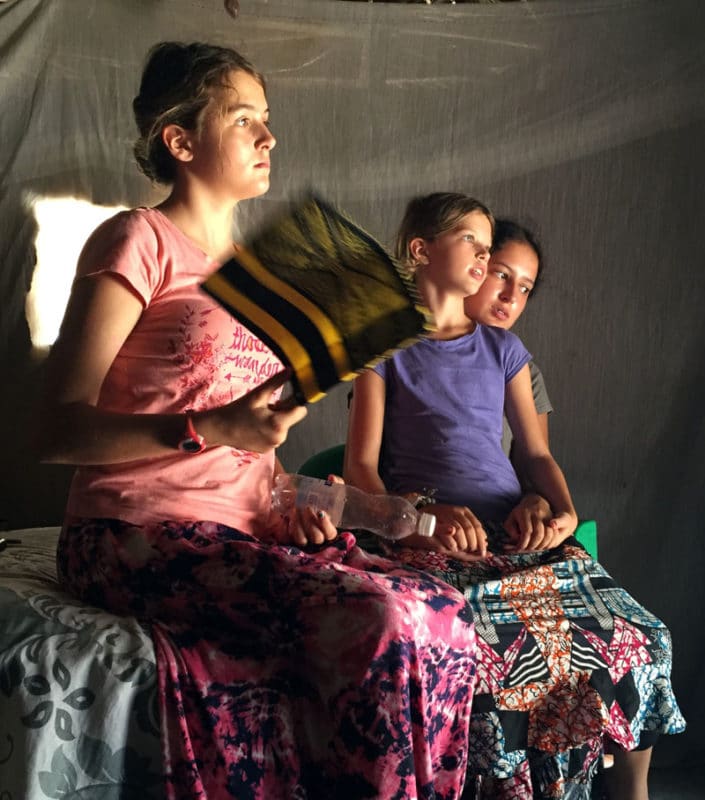 I held the baby again and helped Abby hold the baby.

I looked out the doorway and saw about 8 little boys with sticks laying on their backs under our truck looking at all the different parts of the undercarriage. And saw another little boy throw a rock at the truck and get scolded by his mother.

Jeremy went out to the truck to get kleenex for Annalise’s runny nose.

They brought in cold water bottles for us and asked us to stay for lunch.

Glancing at my watch, I knew lunch for a Senegalese family was still 2 hours away…

A lady came in with her daughter and told us her daughter had never seen a toubab (foreigner or white man) before so she wanted to see us.

By this time, I realized that our metal guy hadn’t held his baby yet! So I handed him over and witnessed the most precious moment… their little family together.

She nursed the baby.

I took a few family pictures for them with our metal guy’s phone.

We chatted a little more but for the most part, we sat silently. Smiling at each other, looking at the baby and trying to pass the time. They don’t feel the pressure to talk and time doesn’t have the same value… the day was more about the event, not the time on our watches.

With sweat dripping, we waited.

Jeremy asked if we could pray for the baby… to which they readily said yes… so in Franglish, we prayed for him in the name of Jesus. Prayed for healing and health and the Spirit of God to rest on his life. We prayed for open doors and greater opportunities in this family and in this village.

I glanced over and saw tears on their faces.

Lunch arrived and we sat on the floor around the common bowl of rice and onions. Normally, this dish has chicken or fish but there wasn’t any meat so they added chunks of potato on top. This is one of our girls’ favorite meals and they were thrilled to eat especially since it was almost 2 in the afternoon. 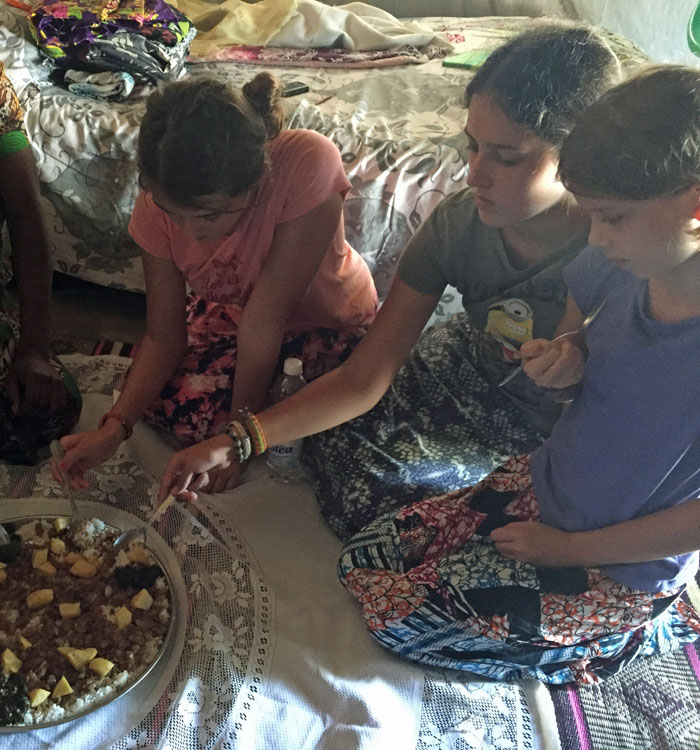 Everyone gets a spoon and you eat only what is in your triangle of the bowl. When you are finished, you put the spoon back in the bowl upside down.

After lunch, we held the baby again. Met a few more people. Drank some apple pop. Tried to talk a little more.

By this time, we needed to drive back home so we said it was time for us to go.

They glanced around at each other talking quickly in Sereer and then said, “…but we want to give you a chicken!”

Elayna looked at me and said, “Mom? They are giving us a chicken? Dead or alive?”

I did not have an answer but Jeremy laughed and said, “I would imagine alive.”

Sure enough, kids were running around outside trying to catch us a chicken.

Our girls were up and standing at the door watching and laughing because they were so excited about getting a chicken.

And the families of the village were laughing and smiling because it was making our girls so happy.

These sweet faces showed up carrying a chicken as our gift for coming to see them. 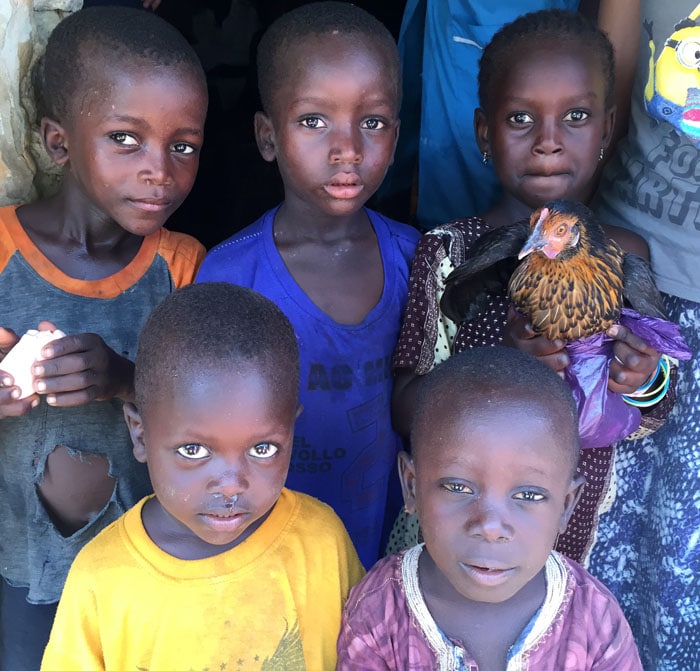 I asked if we could take a picture of the kids and our girls with the chicken. 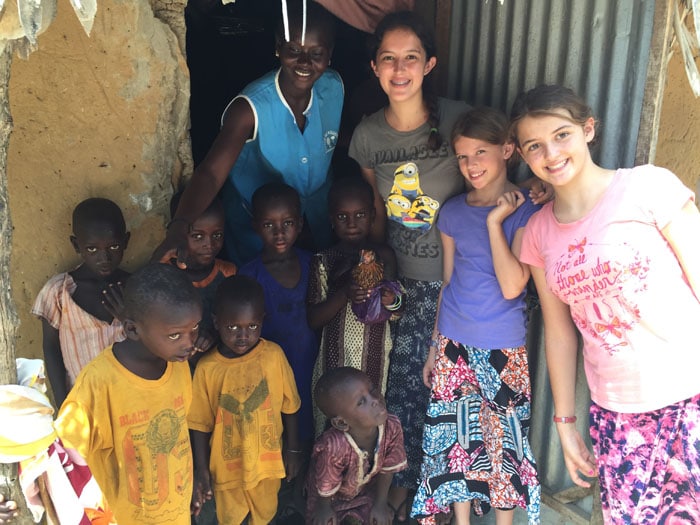 Our girls were not at all excited… can you tell? 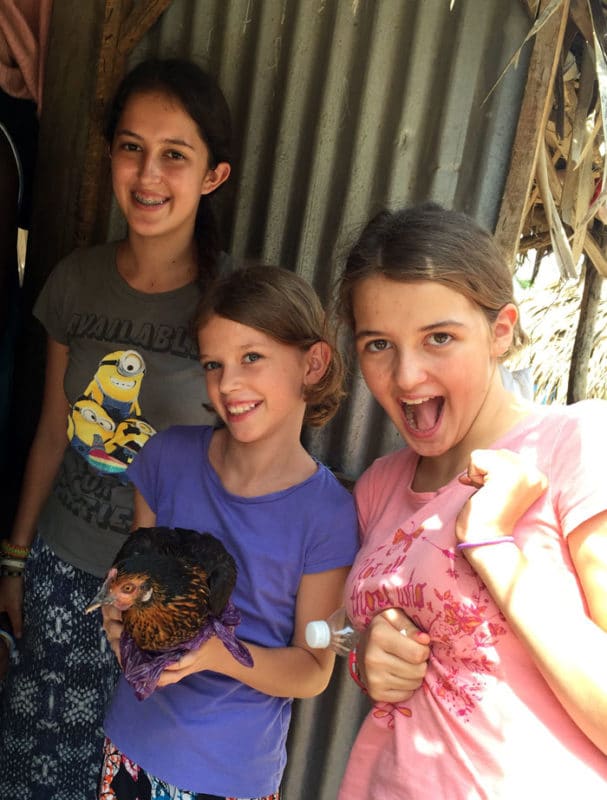 The girls proceeded to name it “Pepe Poulet” and fight over who got to hold the chicken for the hour or so drive back home.

Elayna won that argument because I was not about to let Annalise or Abby take on that job in the truck. 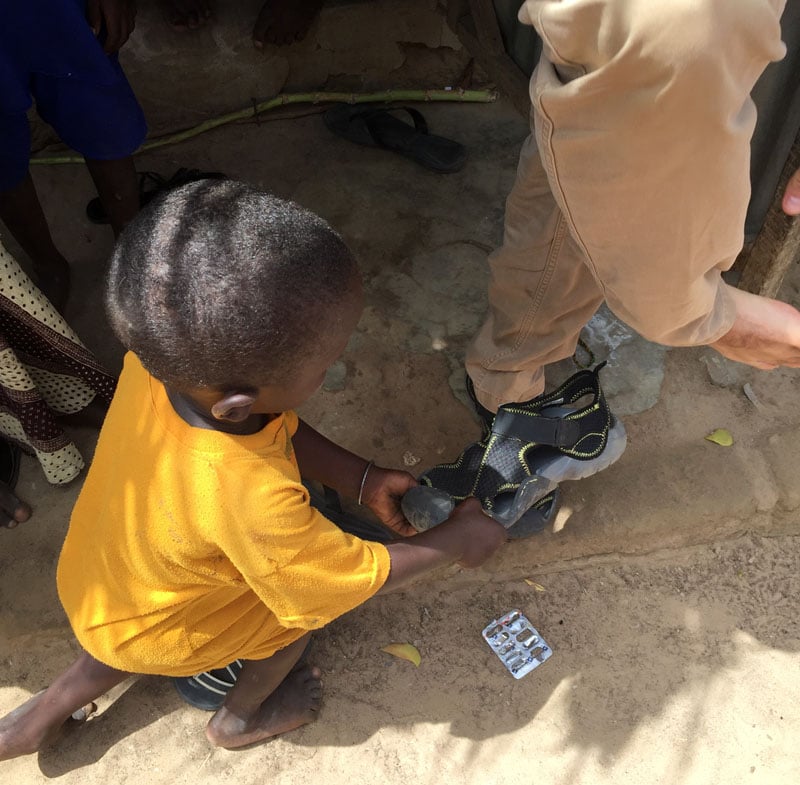 Our girls had fun with the chicken before we climbed into the truck to go home. These boys sat amazed of the truck and at how excited the girls were about a chicken. 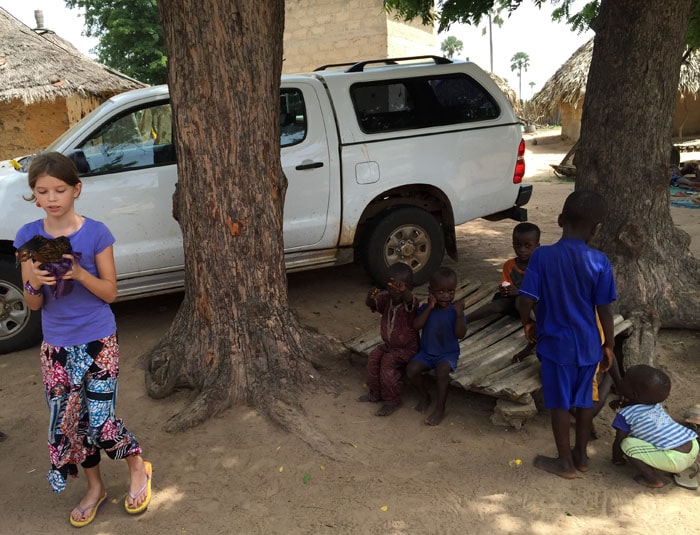 We took our metal guy back to his shop, ran a few errands and finally arrived back home.

Then, we all just stared at the chicken and laughed.

We had a chicken.

And Zander did not know what to do about it. #morepuppyproblems 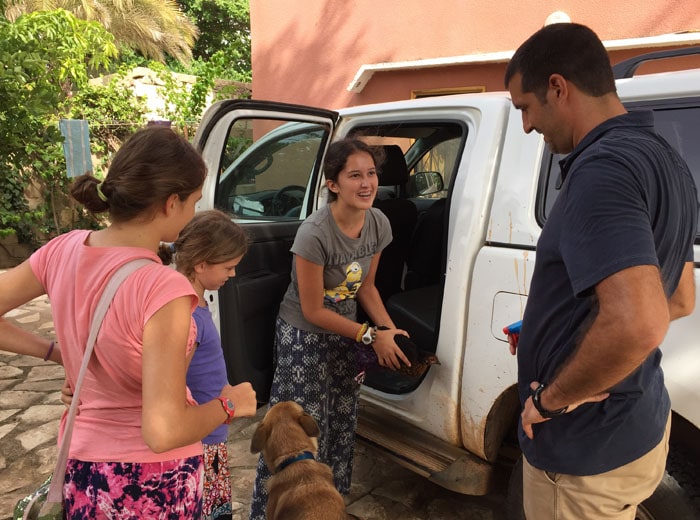 The chicken escaped our yard the first night and our guard found it the next day somewhere in the neighborhood. So, he and Jeremy made a little house out of a box for the chicken to live in for a few days. 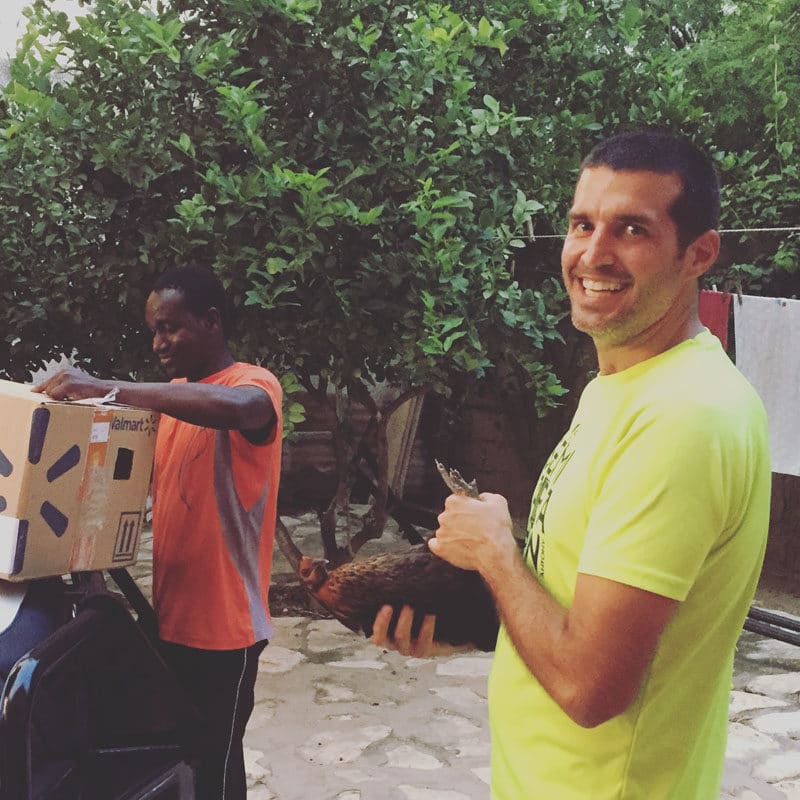 But the evening of the day we went to the village, we got at text from our metal guy telling us thank you for coming and asking when we would go again.

Go again we will.

And that is a day in the village with a precious family, a sweet baby and amazing moments.

And that is a daySave

The Troubles We Experience Overseas
Next Post: New Ways to Pray for Missionaries 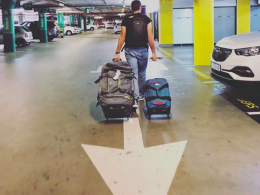