When Forgiveness is Freely Given

Forgiveness in marriage is probably one of the most difficult things to accomplish.

When you’ve been wronged or hurt or mistreated or used or annoyed in any circumstance, it can be hard to find forgiveness.

In marriage, these things are magnified 10 times until the word forgiveness gets more than a little fuzzy.

It often gets forgotten. 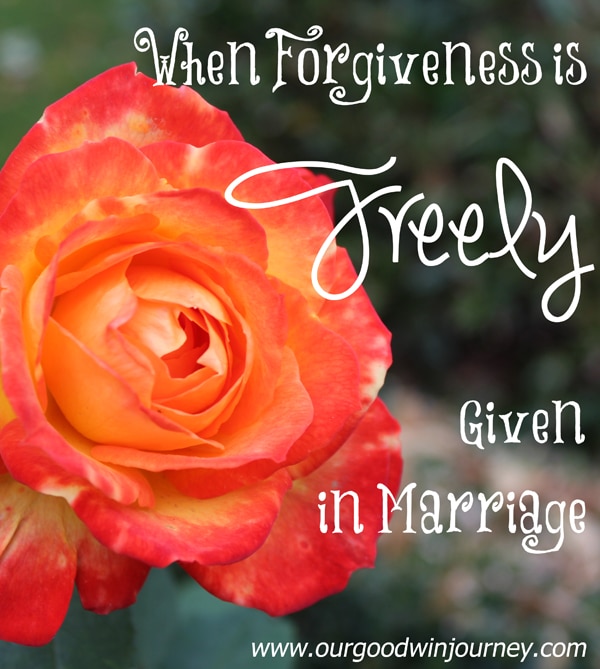 I had a moment recently.

Jeremy had made me mad. He’d hurt my feelings. He’d said something that bothered me and gnawed at me all day long.

He had said the sweetest apology. ever. And I’d basically ignored him.

I know. Great wife win for sure.

Not a great wife win at all.

You see, I had actually hurt him just a few days before.

We are living in a pressure cooker of stress most days and our mouths are the first to fly at each other when things are going hay wire… which they do quite often in France.

My cell phone plan is messed up and not working due to some really, really goofy paperwork.

We ran out of bottled water. And I paid too much for more. And on and on that story goes.

Silly things that can become BIG things in the midst of stress. Especially in marriage.

But back to my really bad, awful wife moment.

I was having a hard time forgiving him. I was mad, tired and just plain happy to pout.

But I quickly realized, during that moment when I had hurt him, that I had actually prayed a simple prayer of, “Let him graciously forgive me.”

Neither of us is really mad at the other… we are reacting. Quickly. To unmet expectations and disappointments of our surroundings.

And when I know neither of us is really mad, yet we are acting out of frustration and pulling apart in a time when we need each other most… well, I was praying that he would graciously forgive my quick, hurtful words and we could move past it without any other discussion or issues.

But then here I was sitting in my right to be mad.

He did say some mean words… and I should be mad.

And I needed to graciously forgive him in return.

But after I’d spent a whole afternoon pouting and mad and hurt. completely unnecessarily after his sweet sorry.

Offer it freely… not just in words. But in the deep parts of your heart.

Life Between the Pictures
Next Post: A Resounding Message of Trust