How to Live Fearlessly

Wow. The desire to live fearless is something we all have in us.

Ephesians 6 is about the armor of God. Let me tell you, get a hold of these verses!

But, it is verses 19 and 20 that I want to dig into. These verses teach us how to live fearless. 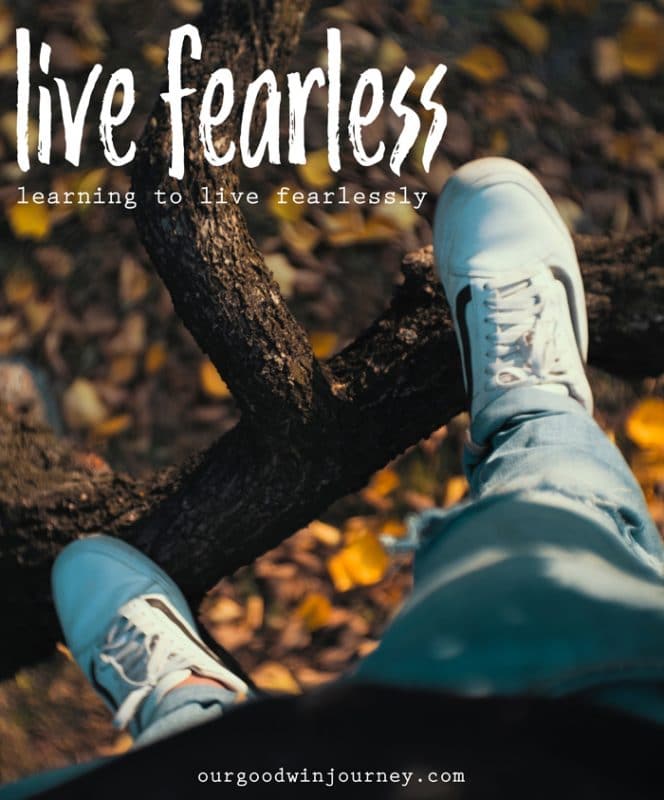 Picture Paul with me. He is a man, touched by God, called to start churches and teach people about how to be a Christian. He is living in a time when it is literally life-threatening to profess Jesus as your King. Throughout the New Testament we see him preach strong sermons and suffer terribly for it.

Even as he is writing the book of Ephesians, he is sitting in a prison for preaching the Gospel.

Then, at the end of Ephesians, he is asking for prayer. He has just instructed them on many important things, last of which was teaching them how to put on the full armor of God.

And, he asks for prayer. He needs something.

He is expressing an emotion that I’m sure we don’t picture as a part of the character of Paul.

He shares his fear.

He needs prayer to overcome his fear.

He says, “Pray also for me, that whenever I open my mouth, words may be given me so that I will fearlessly make known the mystery of the gospel, for which I am an ambassador in chains. Pray that I may declare it fearlessly, as I should.”

Paul struggled with how to live fearless.

He is in prison for speaking about God. He knows that he would be released if he didn’t talk about it again, but he also knows that God has called him for a specific purpose and he can not walk away. He needs boldness to live fearless. What a prayer to lift up from prison!

Prayer to keep on doing what put him in prison in the first place – amazing.

And Paul was not alone in his prayer to live fearless.

In the Christmas story alone, four people needed to live fearless for the story to have happened at all.

John the Baptist – John was preaching about Jesus before anyone even knew of him. He faced unbelief, religious scorn, harsh conditions – all because he knew who he was preparing for. Mark 1:2-4 says “It is written in Isaiah the prophet: “I will send my messenger ahead of you, who will prepare your way, a voice of one calling in the desert, ‘Prepare the way for the Lord, make straight paths for him.’ ” And so John came, baptizing in the desert region and preaching a baptism of repentance for the forgiveness of sins.”

Mary – A young girl, engaged to be married. Innocent and facing charges of unfaithfulness by being with child. Imagine her fear but also her willingness to press on because she knew who she was carrying. Luke 1 says, “The angel went to her and said, “Greetings, you who are highly favored! The Lord is with you.” Mary was greatly troubled at his words and wondered what kind of greeting this might be. But the angel said to her, “Do not be afraid, Mary, you have found favor with God. You will be with child and give birth to a son, and you are to give him the name Jesus. He will be great and will be called the Son of the Most High… “I am the Lord’s servant,” Mary answered. “May it be to me as you have said.” Then the angel left her.”

Joseph – A man about to take a wife, learning she is already pregnant. Hearing the words of the angel and knowing who he would be a father to on earth and accepting the challenge. Matthew 1 says, “When Joseph woke up, he did what the angel of the Lord had commanded him and took Mary home as his wife. But he had no union with her until she gave birth to a son. And he gave him the name Jesus.”

Wisemen – Three men traveled far from home to follow an unknown star. They risked their lives to go a different way home after seeing the baby and not tell Herod about who they had visited and where he was born. Matthew 2:12 says, “And having been warned in a dream not to go back to Herod, they returned to their country by another route.”

Here is the key.

They all knew WHO they were being fearless for.

They accepted their calling because they knew he was God’s Son, that he was coming to save all men from their sin. They saw the calling as more important than their fear. And, I’m sure, like Paul, they were afraid. But, they were obedient, accepted the call and followed through so that God could send his son to earth.

A prayer to live fearless.

It is getting harder and harder to stand up for what is right. That’s partly why we need to take another look at the armor of God.

I recognize the fear in my own heart and will pray Paul’s prayer of fearlessness. Wanting to stand without fear knowing who I’m standing for is a daily goal.

Are we prepared to stand up in the world we live in?

Can we proclaim truth fearlessly as we should?

Are you praying to live fearless?

Check out this book from Sadie Robertson called “Live Fearless”

What Does The Bible Say About Prayer?
Next Post: How to Make a Bird Book for Bird Watching

I’m still here. The days are busy and I’m learning that to get all the things done with daily fatigue, it’s taking some new skills, lots of naps and pacing my energy in new ways. This year is off to quite a start but embracing what God is doing, the plans he has in store and accepting his grace to cover it all. New mercies, deep love and abiding Presence, one day at a time. Happy February ♥️ #chezgoodwin #getjoy #happysunday #birthdaymonth
Another morning of helping a friend with admin… This time, deciphering a massive application for funding to help an early education program that serves kids and gives them a chance to thrive with the right tools in place to learn and grow. #buggingyouteam… you’re a part of all these everyday, real moments! @chandramarqueznoviskie, I loved helping you today! #overseaslife #behindtheprayercard #getjoy #adminfun
Happy 18th Birthday @msanniemak @listhedoodlebeast!! You are as amazing as all those tiny purple pedals, creative, unique, artsy and so, so fun. We love you!! #birthdaygirl #jacaranda #thirdculturekid #goodwingirls #seniorpictures #senior2023
I truly don’t know where the time went but this tiny cutie turns 18 tomorrow! Swipe to see the fun birthday present she got today. @msanniemak #birthdaygirl #goodwingirls #pinkhairdontcare #allgrownup