So this is the post in which a girl who hated running… really disliked any sports at all… never imagined EVER running a 5k let alone a marathon… blogs about actually running a full marathon.

This is the course. 26.2 miles around Paris, France. 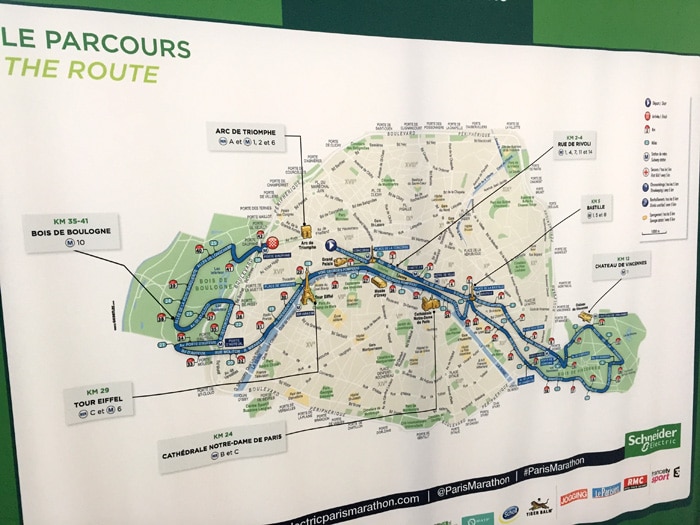 And we were preparing to run it.

Coming off a too long taper due to my foot injury and missing our big 20 mile training run, I was nervous that I was not going to be able to finish.

But the goal was to give it a try, run as much as possible and cross the finish line. I had to realize that our goal of under 4:30 probably wasn’t going to happen but hoping for at least under 5 hours.

We went to the Salon du Running to pick up our bibs.

That was such a surreal experience for me. A running bib. for me. 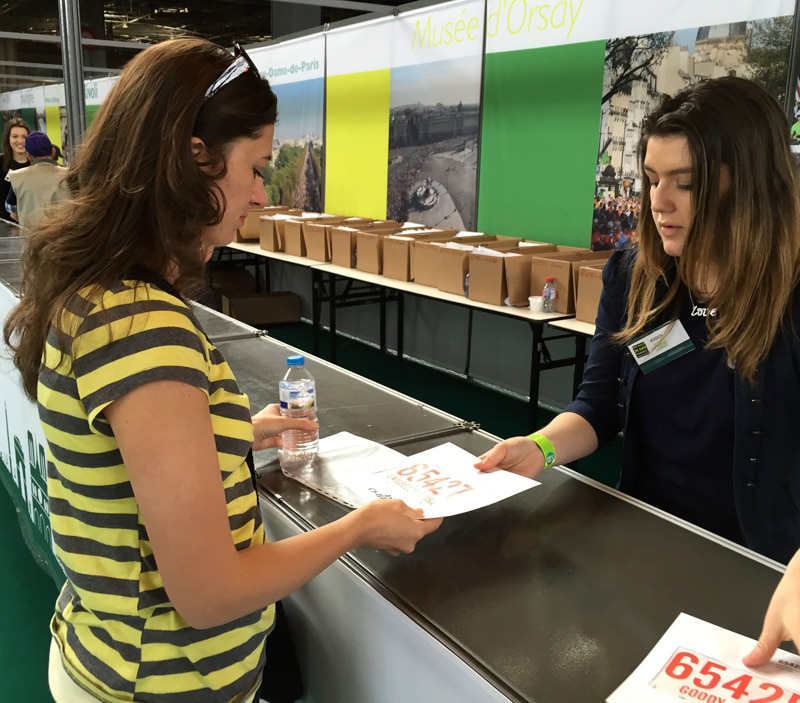 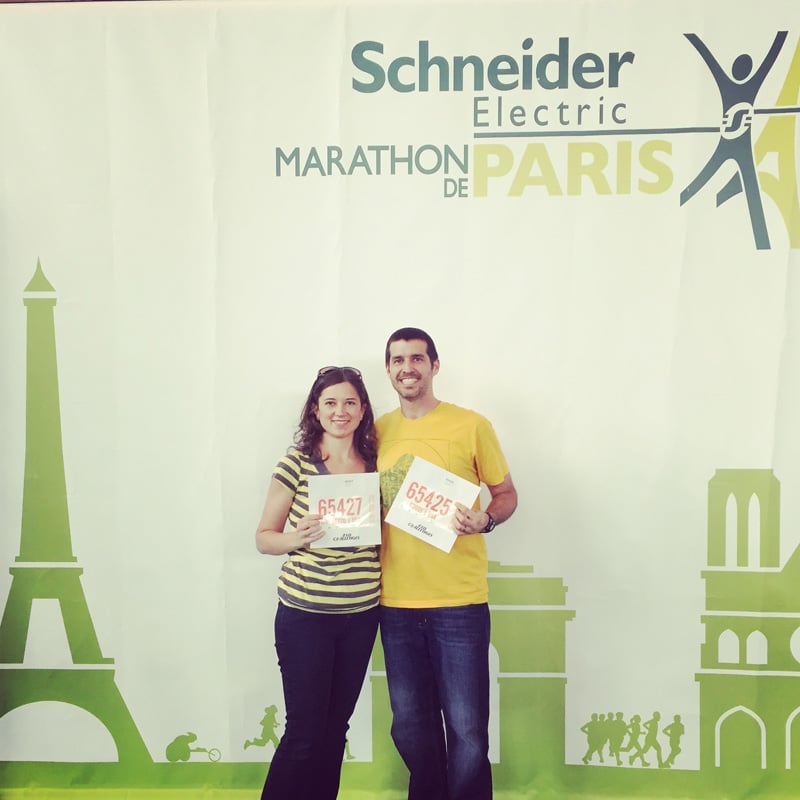 The race would take us by many of the famous Paris locations, allowing us to run in a dream city for our first full marathon.

We signed the wall of runners and found our names among the other 54000 who were registered. 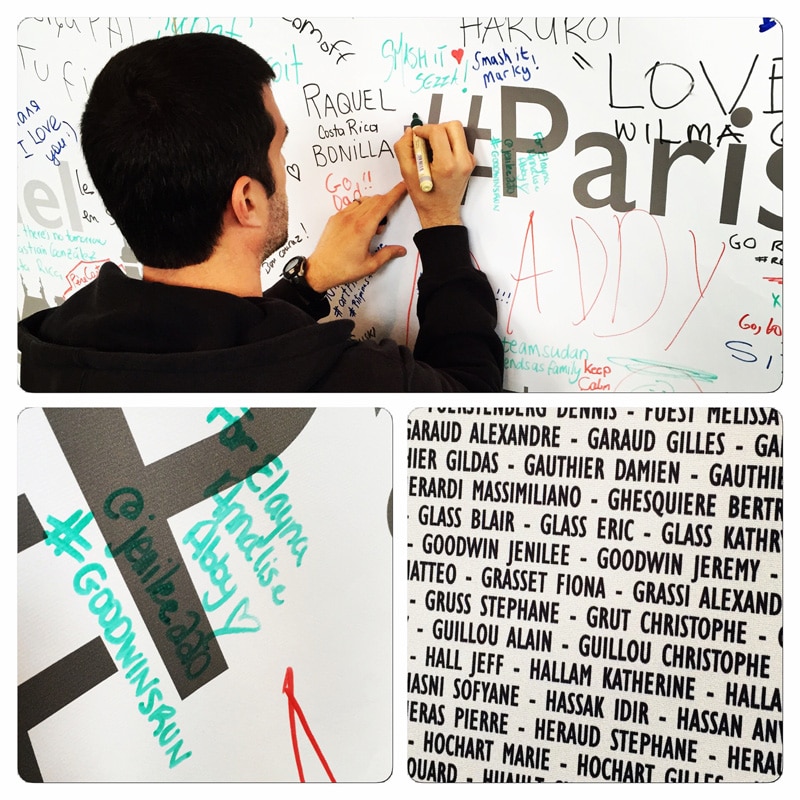 I signed our girls names because this run was about them too. They had walked through the training with us, watching us run an unbelievable amount of miles and helping us through numerous aches and pains over the past few months.

And that is our little photo bomber who was on her way to church with her sisters to spend the day with Uncle Tom and Aunt Marla. 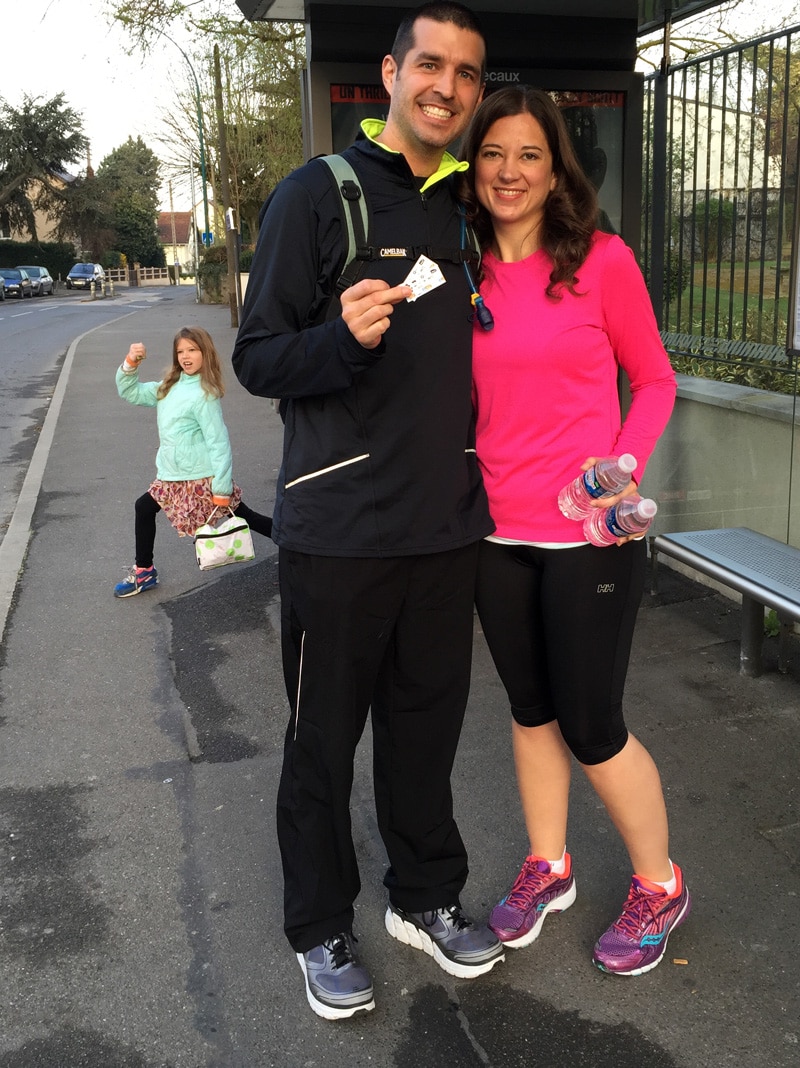 Due to some pre-race “I can’t find you and you don’t have your cellphone with you” happenings, we made our way into the race area as they were closing the doors. definitely later than we were supposed to enter and now not with our time group. We were nearly the last people in line to cross the start of the race. Do you see the Arc de Triomphe behind us? 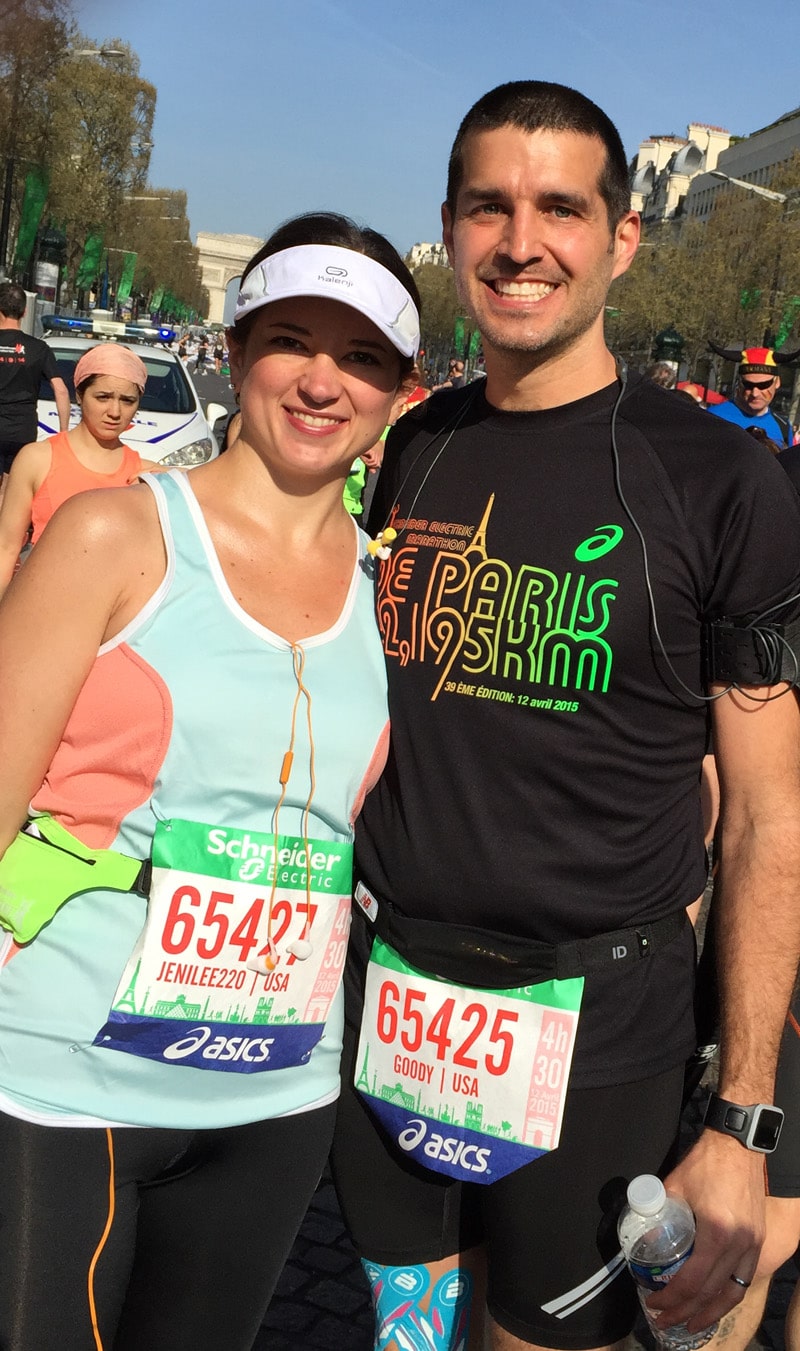 Jeremy had his knee taped up at the Salon du Running because he’s been dealing with a slip in his knee cap at longer distances. The tape held up great! {just don’t ask the story of the actual taping of his knee… think tres francaise et tres bizarre… #notontheblog} With the tape and his compression socks, he was ready to go! 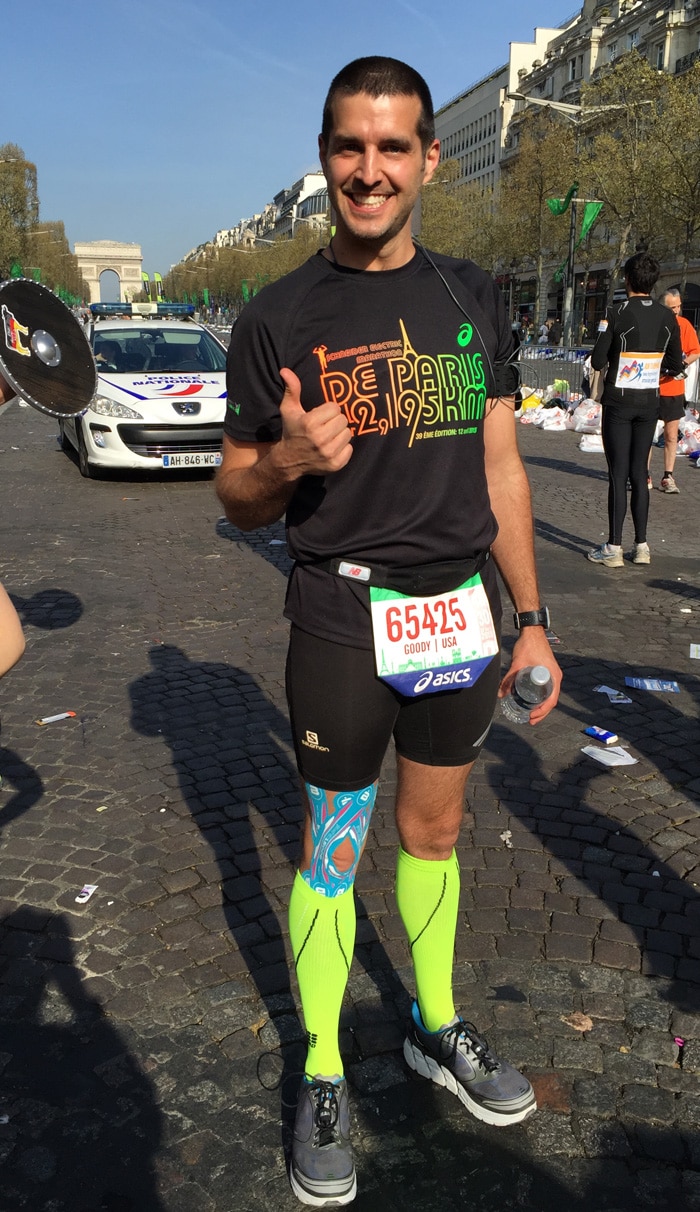 We crossed the start line, following 41000 other runners. {even though 54000 signed up, only about 41000 crossed the finish line} Seriously… that is a lot of runners all in one place! But because we were in the VERY back of the line, we were able to keep a steady beginning pace and not feel rushed at all to move forward so other runners could go faster than we wanted to run.

The other perk of being with the last pace group is that we were able to pass literally thousands of other runners because they were actually slower than us!

So off we went… our first 12 miles were all in the 10 minute range. We had a great start and a solid beginning to our marathon.

But then mile 13 hit. I was starting to feel the miles. Jeremy just kept smiling and running! My last long run was only 16 miles back at the beginning of February so I was entering unknown distances very quickly.

We had run through the city to the outside of Paris into a very large park near the Paris Zoo. We were on our way back into the city at this point, running more 10s and some 11s.

And then I saw these cute faces along the side of the road… right near Notre Dame.

These smiling Goodwin girls with their precious signs made Mommy pretty happy. 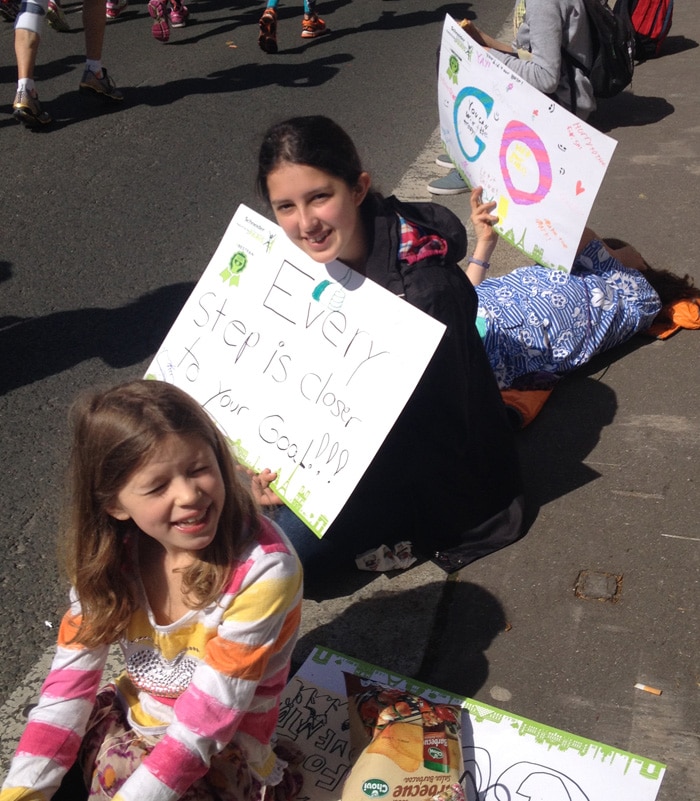 And to those who saw our “just finished” picture on facebook and asked if we were even sweating… well, this picture proves I sure was sweating… alot! 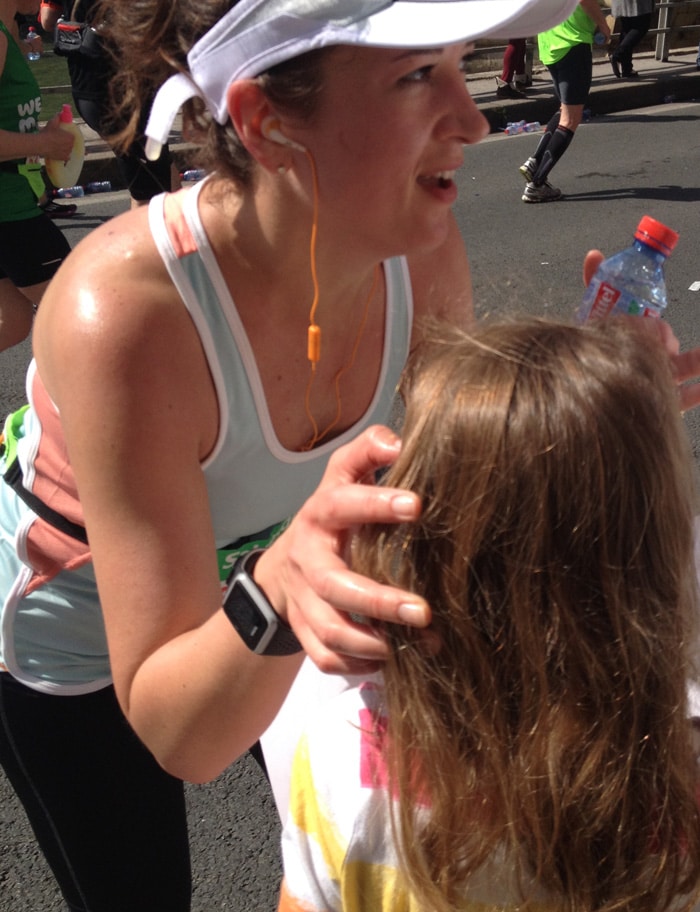 And my sweet almost-birthday girl, about to turn 12, Elayna… 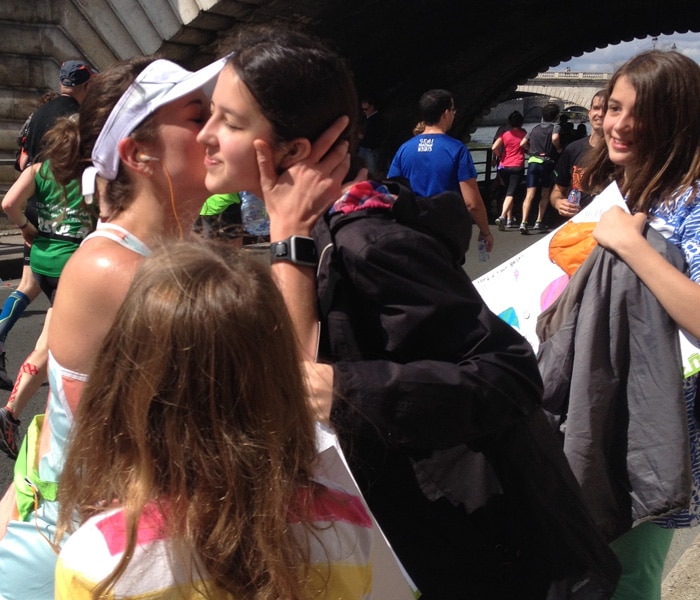 Then, the ever funny Annalise… but while I’m having this heart-wrenching “I’m running a marathon and my girls are here to see me” moment… there is my insanely crazy running partner in the background.

I honestly can. not. stop. laughing at this picture. How much I love this big, smiling, crazy man! He literally smiled like this through the entire marathon! {and I would never have run so far, so fast or so long without him!} 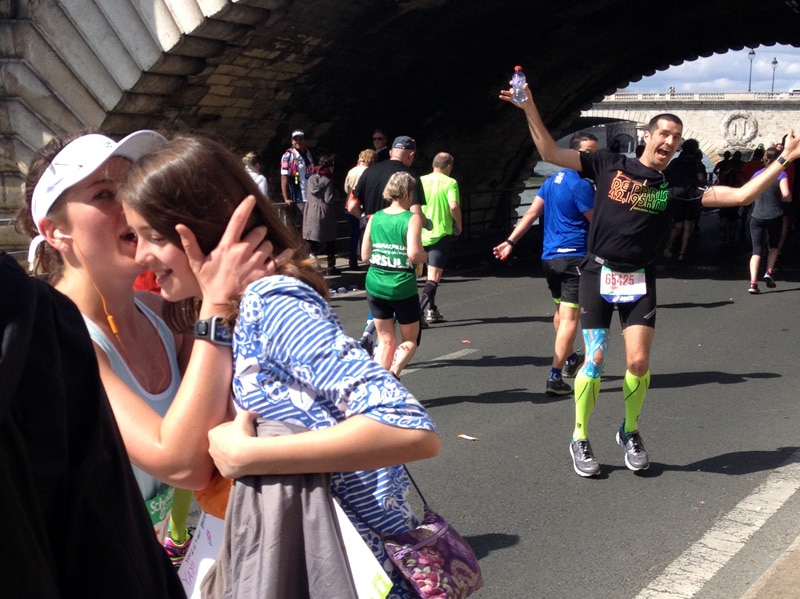 But… then came mile 19. I hit a wave of nausea and felt awful. Which was not good timing because by now we were running by the Eiffel Tower!

And I was too sick to care. And Jeremy was still smiling and cheering me on…

We saw the girls one more time… 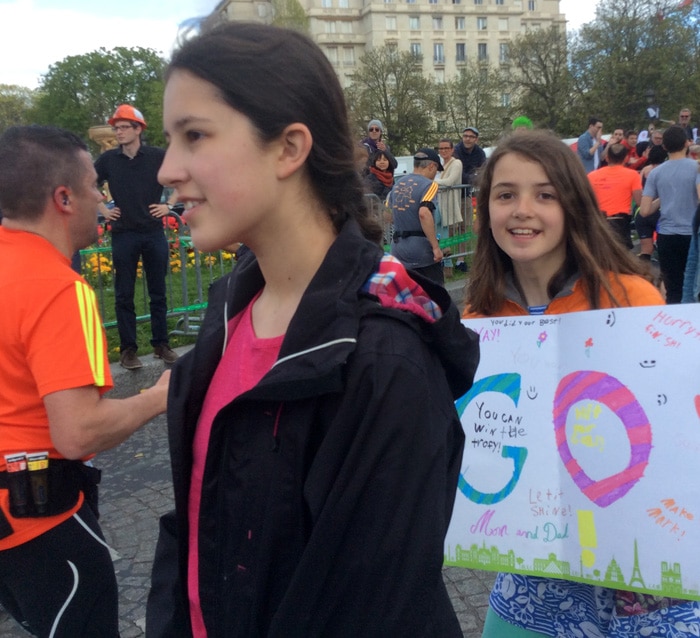 At this point we were nearing mile 21 or so and I was starting to feel better. But I believe the words from my mouth during this picture were “I am dying!” and yes. still sweating. 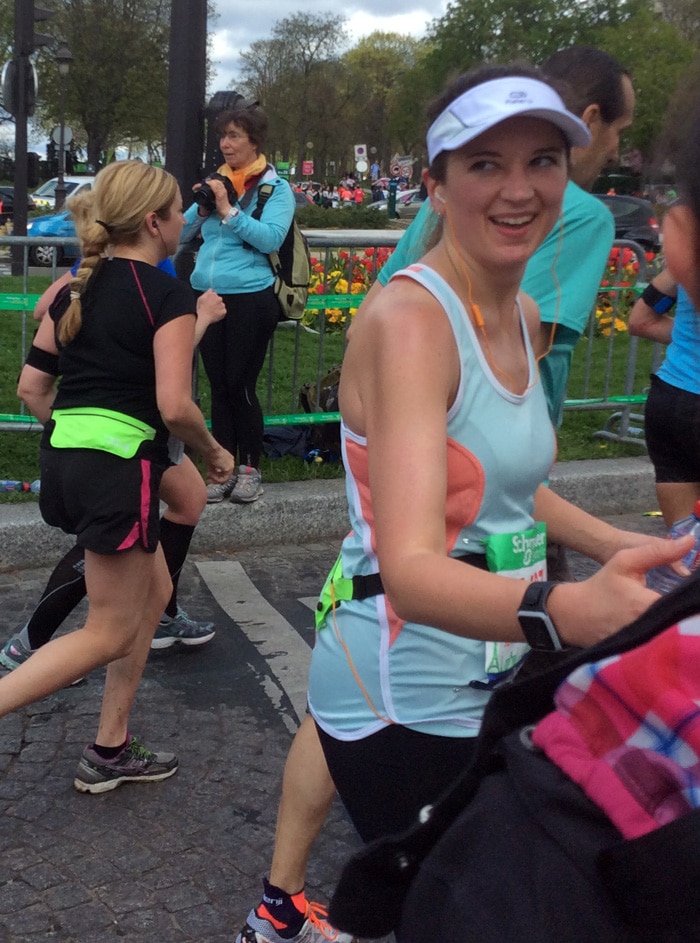 I did end up walking about 30 seconds during each of the final 4 miles… my goal was to fully run this marathon and to do that I knew I needed a few seconds to regroup and start running again. Even at this point we were running 11-12 minute miles.

Here we are crossing kilometer 41. Or at mile 25.5… with less than a mile to go to the finish. 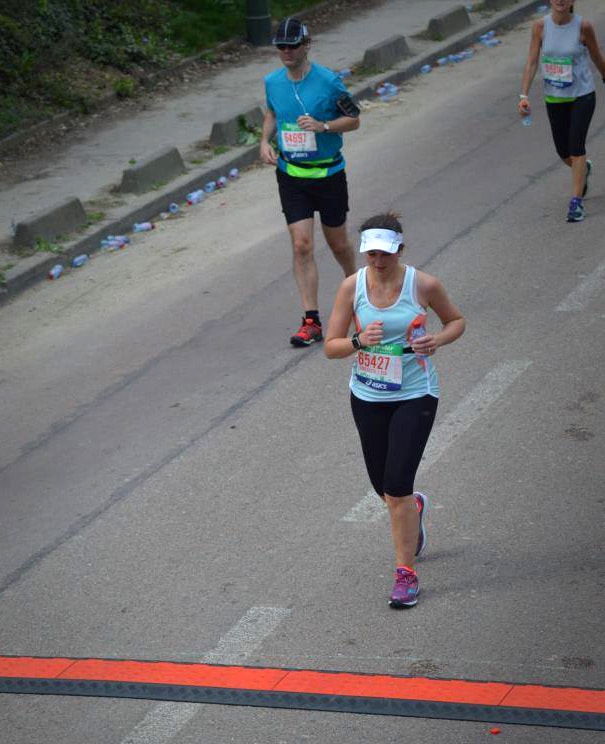 And Jeremy was STILL smiling… 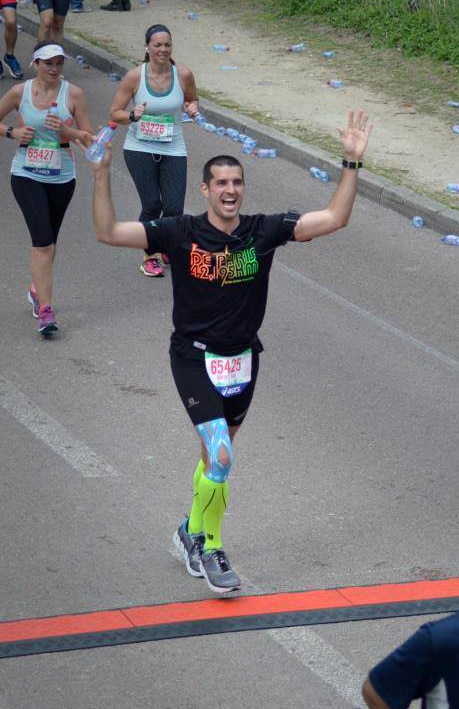 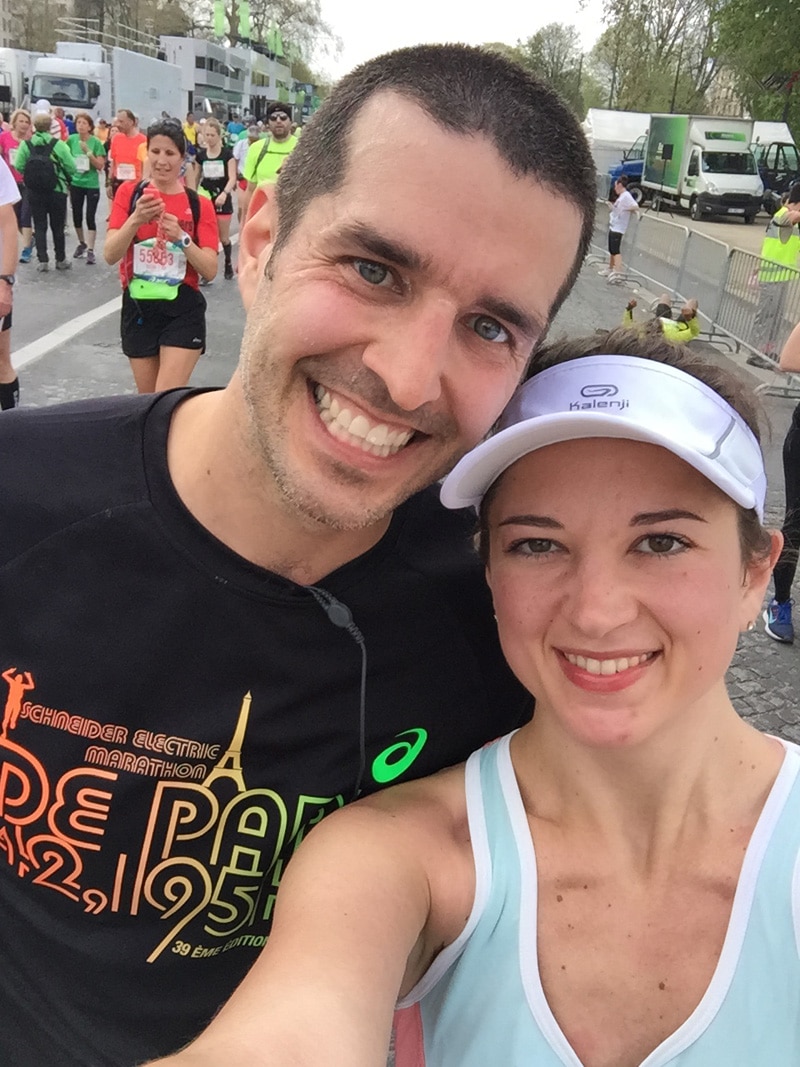 We had no injuries, some minor blisters and a great first marathon experience. We both were smiling now. 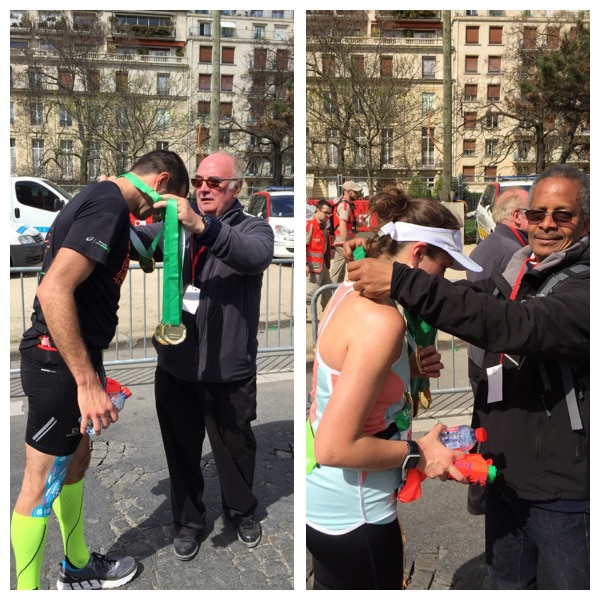 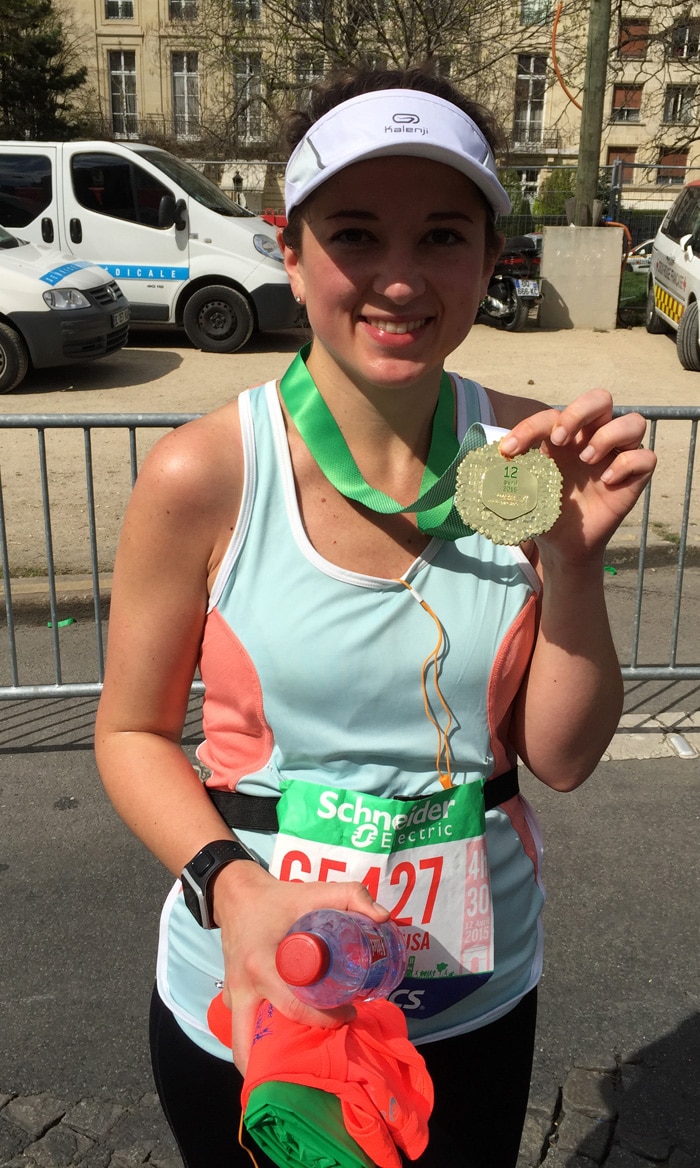 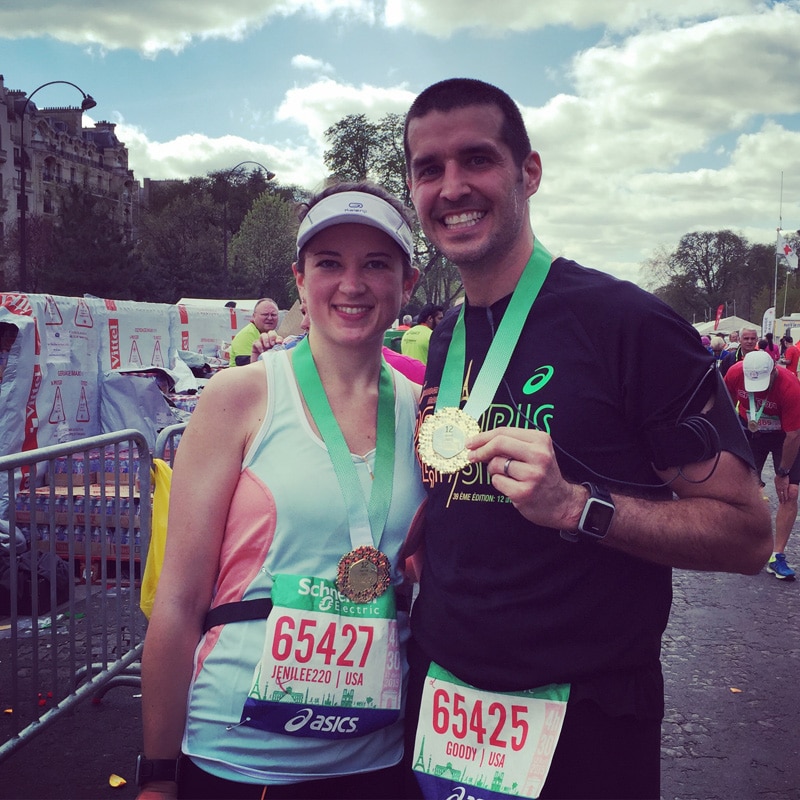 We finished right around 33500th place… which means we passed over 7000 people over the course of the race!

We grabbed some french fries and a Starbucks before heading down into the metro {talk about PAINFUL – watch the first 14 seconds of this video – that was us} to head back to Massy.

And here I am on the walk home, wearing my finisher tshirt, walking another mile to get home from the train station. Praying that all this walking will help get the abundance of lactic acid out of our muscles. Another thing I know about now that I’m a runner. 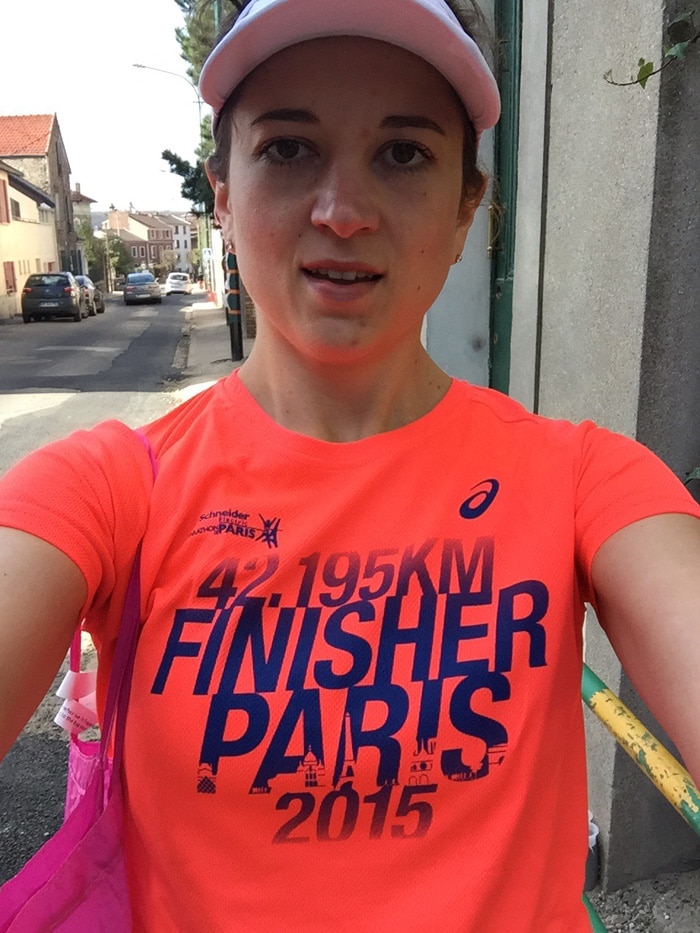 We quickly began a naproxin regimen and got out the epsom salts and the frozen veggies.

The next 24 hours were sleepless, painful and oh so happy.

Our first full marathon is now on the books. or the blog. totally blogable.

Check out our running tab for more running info!

And our tips for running long distances

The Sacrifice of a TCK
Next Post: Things To Tell Yourself Before A Run