Third culture kids are always experiencing new things and each day is an opportunity to learn something new.

This comes out in fun ways and as a parent, it is exciting to watch the wild adventure of TCK life.

I remember when we were first starting our overseas journey and the girls were going to school for the first time. They’d been homeschooled up to that point and were experiencing the novelty of bringing a lunch to school. We were still stateside and they had yet to live overseas.

One day, as the girls were climbing in the van after school, I asked, “What did the kids at school think of you bringing sushi for lunch today?”

“Well… I did get a “that’s disgusting” look from some of the kids. But I don’t care. It was sooooo good.” She said in that drawn out, preteen way.

Abby piped up in her smaller yet still preteen sounding voice, “My friends thought it was gross too. But a couple of them looked like they might like it. But I ate it all. Yummmm.”

My girls do love some sushi.

We’d made some for family night the week before and it was fabulous.

On sushi night, the whole family works together prepping the ingredients and the table area. Then, Jeremy makes a bunch of sushi rolls. We love it.

But back to sushi for lunch… 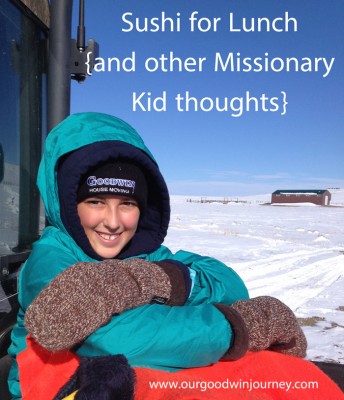 We’d had enough left over from our family night to pack some little containers for the girls’ lunch boxes.

Not exactly your normal lunch for school but my girls thought nothing of it.

As TCKs, my girls have driven around Yellowstone and slept in a hammock for 4 nights all alone during a major thunderstorm in southern Missouri and climbed to the top of the Eiffel Tower and visited a pink lake in Senegal. They’ve spent a year of their lives in a minivan sleeping in hotels, friend’s homes… eating in restaurants, hauling luggage, rewashing the same 6-7 outfits over and over and over because that is all the clothes we had with us. They think a Sunday afternoon meal is best eaten from a communal bowl and add an s to the end of their school subject names… saying maths rather than math. They live in the tropics but don’t wear shorts. They think sweat is just a normal part of every day. They go to a British school with kids from 19 nationalities and are regularly in situations where they are the only English speakers in the room.

My third culture kids have left their home, leaving everything behind. And, they are preparing for another big transition with our looming furlough.

My girls have processed so much.

But we’ve raised them for this. They have been brought up to know that each day is an adventure. We don’t always know where we are going to be the next week. We don’t know where we will eat or sleep. We meet new people, eat out with new friends, constantly say goodbye and very quickly say hello.

We have been intentional about helping our girls understand big world views and the importance of letting go of earthly things and the intense job we have to keep our eyes on heavenly things. We’ve talked about missions and moving to another country and getting immunized and selling our stuff and learning new languages and eating different foods since they were babies.

Elayna ate her first octopus at 18 months old. They’ve eaten durian fruit, balut eggs, squirrel brains, cows stomachs… and just yesterday, Elayna told me that she had “Toads in a Hole”, a British sausage-y thing for lunch at their school.

Bringing sushi to lunch is such a small thing… but such a great example of my girls walking to the beat of TCK Life.

Following the tender, constant, steady beat of our Savior prodding them along on this very unique, quite odd, often weird journey that we desperately love. 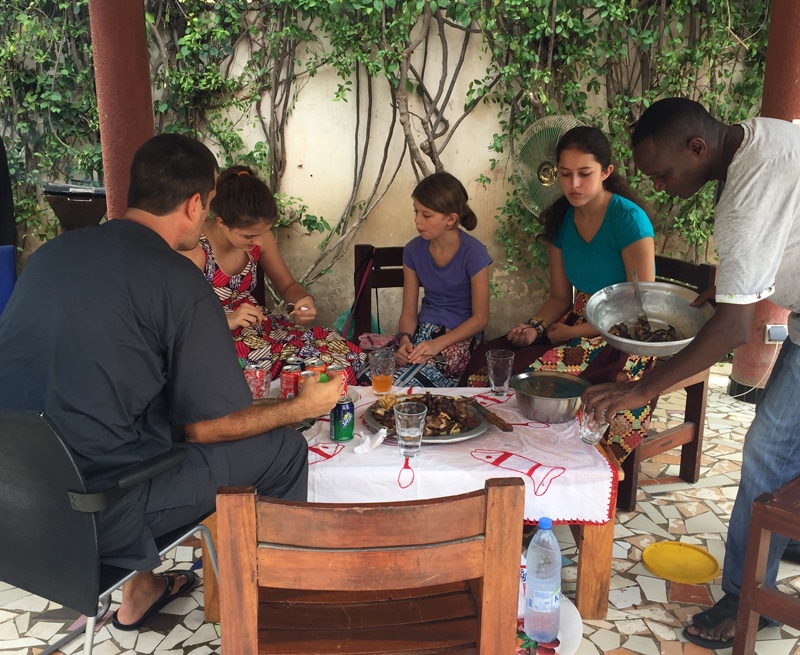 Goodwin girls making a splash in life and braving their big world as third culture kids.

So very different. So very unique. So very us. So very necessary to walk this path.

The courage to have fun, explore, be themselves and love every moment of this full life God has prepared for us.

What is something you’ve noticed about your TCK?

Teaching Kids About Giving
Next Post: Being Blessed with Winter

Here we are… mid-way through May! This year is flying by and I feel like we really have to pay attention or the days are gone. With everything going on… #getjoy. Praise. Give thanks. Trust. Hope. #ourgoodwinjourney #goodwintravels #africaisbeautiful
He’s home from another big weekend with a #hphcteam #kidmin training and a visit to @peoplescapetown! This week, we get to zoom in to @ohioministrynetwork conference along with some local meetings. Then, @reverendgoody takes off again for a week of teaching at the Bible school. With our heaters running and #goodwinhomeschool going strong. Happy Monday! #buggingyouteam #getjoy #ourgoodwinjourney
Sometimes, getting MKs to talk about their experiences takes a little extra thought, attention, care and loving questions. They are deep wells of experiences, griefs, joys and knowledge. I love getting to pull small #behindtheprayercard stories out of these amazing girls and hear their sweet perspectives of #overseaslife. Talk to an MK. Listen… really listen. Let the stories pour out. #goodwingirls #mklife #thirdculturekids #ourgoodwinjourney
Coordinating stuff on two continents. Sometimes… whew! A new driver, a closing on our house {thank you Lord!}, college/dual enrollment, work, all the insurances, planning work travels… with help from family, figuring out crazy time differences, and lots of emails and WhatsApps.